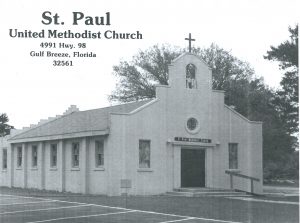 Many people are unaware that when St. Paul United Methodist Church was established it was the first protestant church between Fort Walton Beach and Pensacola. It was consecrated to the “Service of God” in late 1954. And like many pioneering efforts through history there were obstacles to be overcome before St Paul achieved its present status as a vibrant force for God in the Panhandle.

St. Paul began as a mission in 1954, meeting in the Benson Building in downtown Gulf Breeze. In late 1954 land was donated at the present location. Members of the mission church began clearing the land in February 1955 and officially organized as St. Paul on March 4, 1955 with 12 charter members. 7.5 acres were then deeded to St. Paul at the annual conference and work began on the building with all volunteer construction. The dedication ceremony “to the Glory of God and the Service of Man” was held February 19, 1956. In 1961 Sunday School rooms were added; evening services and Methodist Youth Fellowship were begun. The membership totaled 65 in 1963.

By 1968 the church and the membership voted to become an attachment to the Gulf Breeze Charge with a plan to hold Sunday School weekly and Sunday worship monthly. Although not officially closed, the church fell on hard times. At last on September 2, 1973 St. Paul, led by the Gulf Breeze pastor, physically reopened with 27 members for Sunday evening worship services. The next few years began the rebirth of St. Paul, of “heading in the right direction, resolving conflict, spiritual growth”. Plans were made for the future: buildings were remodeled, repainted inside and out, and air conditioning was installed.

The membership had grown to 58 by 1981. During this time Sunday evening services, Wednesday night programs, the choir, and the United Methodist Women were all initiated. The Highway 98 sign was added, and the old parsonage was renovated for additional Sunday School rooms. The existing sanctuary and Sunday School rooms were upgraded as well. By 1983 membership had grown to 147, a long-range planning committee was established, and land was traded to increase the Highway 98 frontage. Membership totaled 177 by 1985, a second Sunday morning worship service was added, a stewardship campaign initiated, and construction began on a parking lot through donations. Membership grew to 204 by 1986 and part-time staff added, including a pianist for all services and a secretary. St. Paul had 25 members in the choir then, the United Methodist Men met monthly for breakfast, and the United Methodist Women had both a morning and evening circle. In summer 1987 75 children attended Vacation Bible School, and both a Sunday evening Praise service and a prayer service were begun. “Voice of praise” was organized for special music during the early Sunday morning worship service.

With this growth additional space was needed, so plans were implemented in 1988 for the addition of the new Sanctuary, Sunday School rooms, choir room, offices, and the original facilities were refurbished. Consecration of the new building was held June 11, 1989, with the membership then standing at 301. The FANS Club (Friends & Neighbors of St. Paul) was organized by the older adults of the church, and monthly supper clubs were formed. St. Paul gave financial support to a missionary with the Spirit of Faith Children’s Center in Nairobi, Kenya. Growth continued with Sunday School attendance nearly doubling. A Wednesday night supper program was started and a children’s playground added.

By 1991 membership had reached 356, and the church parking lot was expanded and paved. The Fellowship Hall kitchen and Youth House were renovated. Pioneer Clubs for the younger children were initiated, a Jr./Sr. MYF, a children’s choir, and a Singles ministry were begun. Growth continued to 362 members in 1992, and the church added a part-time music minister, and part-time youth minister.

As of 2004 membership had reached more than 500, and in 2005 membership is somewhere around 600. St. Paul United Methodist Church celebrated their fiftieth anniversary of the founding March 4, 2005.

The History of the Three Crosses

The three crosses are a familiar sight to motorists traveling East on Highway 98. Their location close to the highway on property belonging to St. Paul United Methodist Church in Midway was a strategically chosen to be an eye catcher to passersby and a reminder of God’s love and mercy. The three prominent white wood crosses erected upon the outer portion of the property belonging to St. Paul United Methodist Church on Highway 98, midway between Gulf Breeze and Navarre, have been standing in the same location since 1987.

There’s an interesting story behind those crosses… not just the Biblical one related to Jesus Christ, but the historical one that explains how the crosses happened to be there and who put them up. The natural assumption that St. Paul UM is responsible for their erection is not correct, although the church granted permission for their placement in the present location.

According to a long time administrator at the church, one summer day in 1987 a gentleman by the name of Ed Schriefels dropped in to speak to the pastor at St. Paul who at the time was Reverend Doug Pennington.
Schriefels explained that he represented a Methodist minister and former businessman, Reverend Bernard Coffindaffer, who had initiated a ministry of erecting trios of crosses in highly visible areas around the world. According to the narrative, Coffindaffer had undergone open heart surgery in 1982 and during his recovery had received a vision in which he was told to begin erecting the “Crosses of Mercy”. The first group of crosses were erected in 1984 sixty-five miles north of Charleston. Over a ten year period it was followed by 1,842 cross clusters placed in twenty-nine states, the Philippines and Zambia.

Prior to entering the ministry, Coffindaffer had made his fortune as the owner of a coal-washing mill in West Virginia. Once the cross ministry was initiated Coffindaffer dedicated all his wealth to it, estimated at $2 million. The ministry was also supported by a nonprofit group call Cast Thy Bread. Over $3 million has been spent in the last ten years to erect the crosses.

In an interview before his death Coffindaffer said “The crosses are to remind people that Jesus was crucified on a cross at Calvary for our sins and He will soon return.”

When Coffindaffer asked Pastor Pennington for permission to erect the cross cluster on St. Paul’s property there was good reason for the church and its trustees to give approval. “With thousands of cars that go by each day those crosses are a constant reminder of the death and resurrection of Jesus Christ,” said Pastor Ruel Ausley the present minster at St. Paul. “It is a daily witness and we pray continually that lives are touched and changed because of their presence. We have no idea of the results that come from that.” That’s where trusting God enters into the cross ministry.

Written by: Bobbi Haycox
November 1998
Around 2005 the crosses were damaged in a hurricane. Many thanks to the members of the Faith Lessons Adult Sunday School class who purchased and installed the new crosses.

Receive news on specials and events!